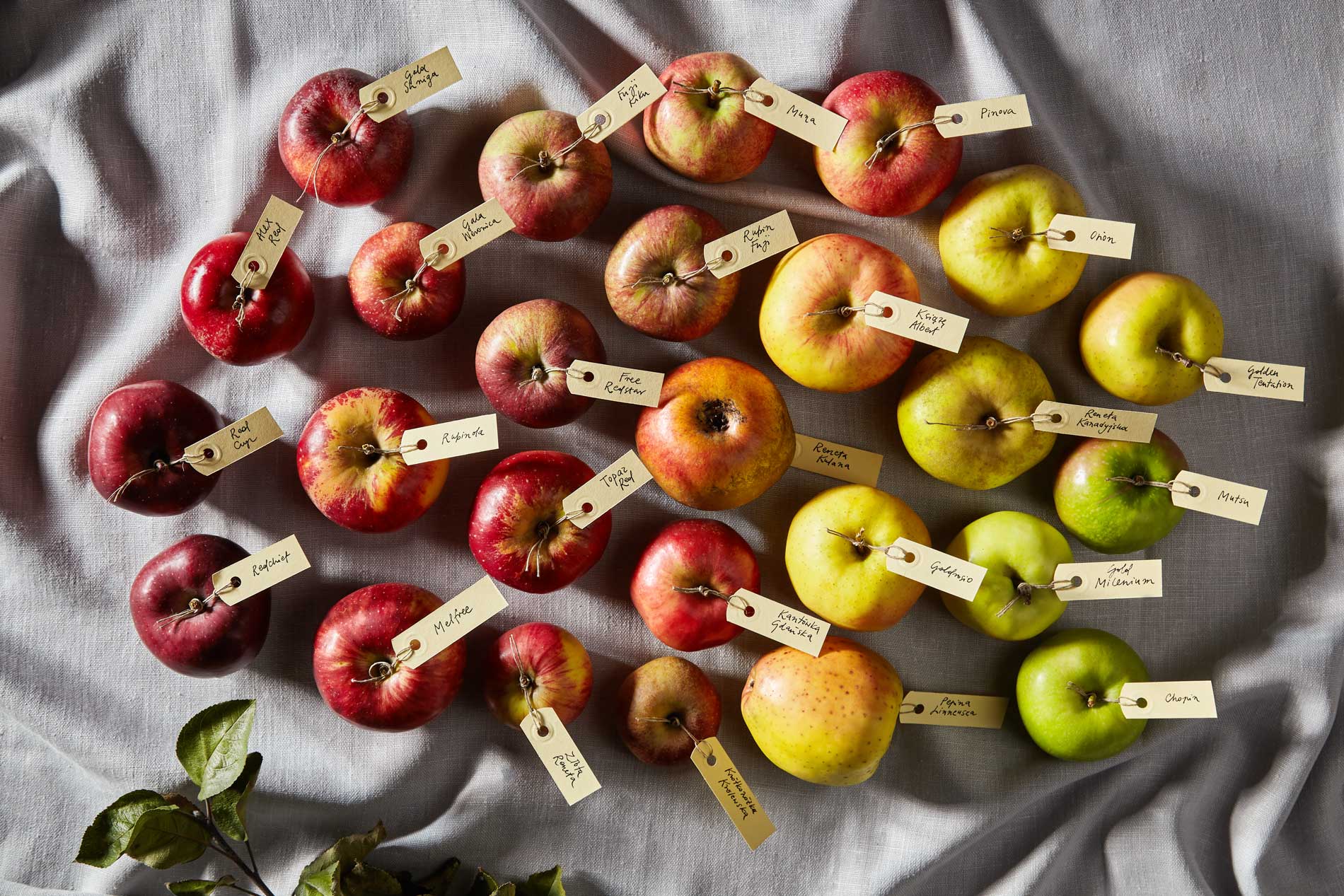 In every corner shop in Poland you can find at least a few types of apples on sale: sour, sweet, crispy, soft, juicy, hard, etc. There is much discussion going on about the superiority of some types over others. Each kind has its devoted admirers who can spend hours advocating the qualities of their favourites.

Apart from old, traditional types, cultivated by our orchardists for the pleasure of having them, Polish fruit producers cultivate and improve apple breeds from all around the world. Amongst the most popular you can find: Jonagold, Gala, Champion, Idared, Cox, Ligol, Green Granny, Goldstar, Paulared, Rubin, Cortland, Lobo, Costel’s Apple, Antonovka, Reinette, and, of course, the early summer Papirovka.

Whether old or modern, any type of apple grown on Polish land are superior in flavour, freshness, naturalness, and usefulness at home and in industry to those grown abroad.

One of the oldest types od Polish apples. A true delicacy and, unfortunately, these days – a rarity.

It is said that in 1590 the Royal Gardner, Jakub Wiczarek who served under the King Jan III Sobieski, imported an apple tree known as Wierzbowka Biala. The king and his beloved Marysienka immediately fell in love with the delicious flavour of its apples which were exceptionally sweet and juicy, unusually scented and golden in colour adorned with cute freckles.

The apple tree would bear fruit once every two years and the king would personally supervise the harvest. So, how come they are called ‘Kosztela’?

One year the harvest was disappointingly scarce. The king displeased with the effect exclaimed: ‘Just a basket? [kosz (basket) tylko (only, just)] So few of these kosztylki and my Marysia loves them so much.” And that’s how the apples became to be known by the name of Kosztylki (Justbaskets) and later on, Kosztela.

Costel’s apple is a living legend. Until not so long ago it used to be fairly common in the orchards cultivated by our grandfather’s. Today, however, due to the fact it is not suitable for bigger industries, it has become extremely rare.

This apple tree arrived in Poland from Germany in the17th century. It can be linked to a number of interesting facts, stories, and anecdotes.

Until the 1950s it used to be a very popular variety, however, not due to its flavour or suitability to use in preserves (on the contrary!). The reason behind it is much simpler. The picking season for this variety falls in October, but the fruit is nowhere near ready to be eaten then! It slowly ripens in the cellar and is first ready to eat over Christmas. It is not surprising, therefore, that prior to the colourful balls decorating Polish Christmas trees it was precisely the żeleźniak apples that people put on their trees.

Żeleźniak apples are also known as Groszówka [pennyaple], as they used to be very cheap. A sack of a dozen apples was sold at exactly 1 grosz [1 penny].

The tree is very durable and not only does it not need any spraying, it is also capable of growing in sand. It is due to this quality that it was extremely popular in the 19th and 20th centuries as a tree planted on the edge of roads and balks.

This aristocratic tree has its origins in France. As it is extremely demanding it would not be a common sight in village gardens. It arrived in Poland in the 18th century and immediately became sought after. Planted in the gardens surrounding mansions and palaces was well taken care of.

The flavour of White Calville apples is considered to be one of the most exquisite in the world. The apples itself are not evenly shaped – rather irregular and point – which did not stop them being present on the banquet tables at many national celebrations. The fruit is so expensive that it used to be beneficial to import it from the Crimea!

A century ago each Calville apple would be packed in a separate, paper bag even before being picked. During the summer, the orchardists would separately spray each apple with water in order to get the apples to blush. This would naturally increase their price!